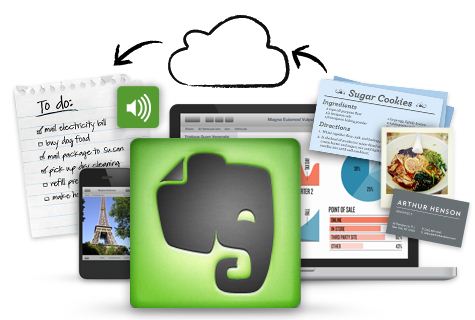 Apps are more than just for fun and games. Many apps are developed to help their busy users get things done. Not only are these apps the gems of productivity, they are just plain cool. Below are eight apps for every hard worker out there, no matter your device of choice.

This reminder app is for those who forget to constantly check off items on their to-do lists. With Checkmark, users can add location and time-based reminders with three easy taps using iPhone’s geofencing capabilities. The idea is that if you set a reminder to get milk at the grocery store, the next time you’re in a grocery store the app will set off a reminder. The app still has a few kinks that need to be worked out, but it’s the best location-based reminder app out there right now.

This app is a storage device for pretty much everything. Photos, voice memos, videos, documents, links, web pages, are all things you can save in categorized notes in Evernote, so you never misplace any information. Evernote can also make to-do lists and has a number of font features to customize lists any way you like. This is the must-have productivity app for all around organization.

Box is for those buried in business documents. The app allows users to view, edit and share Word, Excel and PDF documents from multiple devices. The app comes with 5GB of free memory and the option to purchase more. The app allows users to comment on documents and share files or folders easily using links. This app is a must for business workers who are sick of mountains of paper and printing, plus it is available on a variety of devices, so no one is left out.

DropBox makes photos, videos and documents easy to share with coworkers and friends using at-home computers and mobile devices. Plus, DropBox is anxiety free with security and backup features in case anything happens to your device. The app comes with 2GB of free memory, but it’s easy to earn or buy more if necessary. Users report some weird issues with DropBox, but many solutions to common problems are listed online.

For those who access documents in a multitude of forms, this is the app for you. CloudOn can access Microsoft Word, Excel, PowerPoint, PDF, JPG, GIF, PNG and more. The app can also access DropBox, Box and Google Drive for easy sharing of all of those documents. It does store files online, meaning users need an internet connection to access their files. Users have reported the app having a lag, making it difficult to edit files on the app. However, if you just want to review items, this app will work because it can open just about anything.

This app works just like paper with no fussy settings or multiple files to search through. Paper comes with a pencil to write or sketch with and other tools (paint brushes, colored pencils, markers, etc.) can be purchased in the in-App store. The app has an expressive ink engine that allows for seamless note taking or storyboarding right on your iPad. It also has sharing features that stream to Tumbler, Facebook, and Twitter. Not only is the app ambitious, but it lives up to its expectations, especially with the latest update. If that hasn’t sold you, Paper also won Apple’s Design Award for 2012 guaranteeing a beautiful application.

Android’s personal assistant app is giving Siri a run for its money. Robin has many of Siri’s features, including the ability to get directions, traffic conditions, weather reports and gas prices. Robin can also set calendar reminders and read your Twitter feed to you. When the app isn’t open, Robin has a motion detector that can reopen the app without even touching your phone. Robin is still in Beta stage and it doesn’t have the playful banter that Siri has. That said, the app is developing quickly and can already perform a number of impressive tasks that make it feel as if you have a real personal assistant.

Before Google Goggles, the only way to use a search engine was by type or voice. Now, pictures can also be used to search Google for more information. Google Goggles takes a picture and then pulls up search results on that image, which you can click for more information. The app is still being developed, but it can currently search things like QR codes, historic monuments, books, paintings, and foreign languages. The app recognizes eight languages for international travelers. Although this app is innovative, it is still being developed and doesn’t have the same vast database that typing information into a Google browser can access, but it will with time. This is definitely an app to follow.
How have these apps increased your productivity? What other productivity apps do you use?
About Author: This Guest Post is by Justin who writes about sports, technology and marketing for Satellite Television.