In the era of  smartphone’s wars, there are two clear winners at the moment. The iPhone has millions of loving loyal fans and so does Google Android in its many guises.Now lets take a look at their qualities. 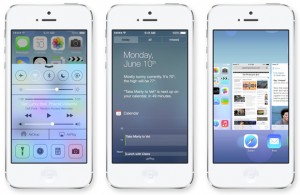 The rebirth of iOS 7 is evident from the Welcome screen. iOS 7 starts with a plain white screen that just says “Welcome to iOS 7.” That’s it. Quite contrary from the skeumorphism — a design style favored by Schiller and Jobs — which essentially models one’s digital life to mirror reality. For instance, in iOS 6, the Calendar app actually resembles a calendar. But, in Jony Ive’s “flat” iOS 7, the Calendar app takes a minimalist approach, ditching the leather and opting for a cleaner look. As an iOS user from since before I can remember, the change is definitely welcomed.

Despite iOS 7’s differences, Apple is definitely playing from behind when it comes to the user interface. It seems like iOS 7 is just an amalgamation of Android and Windows Mobile’s extremely flat operating system. Apple’s new parallax effect makes it seem like the icons are jumping out of the screen, but Android’s Jelly Bean has had that effect since it’s inception. The thing is, Apple has a unique ability to take the best features of other platforms and convince users that they’re “innovative” ideas. A flat operating system isn’t remotely innovative or groundbreaking — it’s been around for awhile — which is why Android wins this round. Winner: Android. While iOS may look flashier and nicer, Apple’s essentially copying the best of Android and Windows Mobile.

Jelly Bean is an new iteration of Ice Cream Sandwich (ICS), which was a major update from the previous Android versions: Honeycomb. That means an Android phone running Jelly Bean will look very similar to one running ICSand some what with same processing.

One big new feature in Jelly Bean was Google Now. Put simply, this is a selection of ‘cards’ which appear on your screen in an attempt to give you the information you want before you ask for it.
That means you’ll get a current map and latest traffic information just before you leave home for the office in the morning, get a reminder of an upcoming appointment, the status of a flight you’re booked on, weather reports and favorite sports scores.
Google Now isn’t exclusive to Jelly Bean any more, though. iPhone owners can easily download Google’s app which replicates some of the Now functions, but it lacks the some  tight integration with iOS.
Both iOS 7 and Jelly Bean have notifications, such as incoming text messages, emails, reminders and calendar appointments. Jelly Bean lets you expand the some notifications, and swipe to dismiss notifications. Many manufacturers also add controls and settings to Android’s notification screen.
iOS 7’s provides a Notification Center that is  build on iOS 6 by adding tabs to it at the top so you can see everything for today, all and missed notifications. It replicates close to Google Now a little by providing you a weather forecast on the ‘today’ tab.

Multitasking in iOS 5 and 6 has always been tricky to manage somewhat . Once you’ve mastered the double-press of the home button in apple (or the four-finger swipe up from the bottom of your iPad) you have to long-press on an app in the list, then tap the tiny ‘x’ to stop that app.
In iOS 7, Apple has adopted an good approach  that’s much closer to Google’s way of doing things. The multitasking windows now occupies the whole screen and in addition to the app icons, you see a thumbnail of what you were last looking at within the app. You simply swipe to dismiss the apps you want to close,it also reduces efforts.

In Many  Android devices ,they require a long press of the home button to see the list of current running apps, while others have a dedicated soft button. 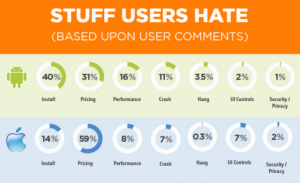