Is this the time when smart phone users will be left with a choice to choose the best operating systems for them? Will it be Windows, Android or iOS? The choice takes us straight on the most talked about phones right now which are Samsung Galaxy S3, Apple iPhone 5 and Nokia Lumia 920. Each of them can claim to be the best of all time.
Apple came up with its latest release iPhone 5 with iOS 6 which set records with its pre orders. It’s increased display size of 4inches the users will finally get something bigger than the earlier version having 3.5 inches. iPhone 5 comes up with iOS 6, the latest operating system that Apple is offering. It has a dual camera with rear-facing 8 megapixels and front-facing 1.2 megapixels. Currently Carriers AT&T, Verizon and Sprint are offering the iPhone in 16GB, 32GB & 64GB respectively. With all new design iPhone 5 is the thinnest and lightest iPhone ever produced.
On the other hand Nokia will be releasing its latest phone from the Lumia series, Nokia Lumia 920. It will be featuring Windows 8 mobile operating system. With a Dual-core 1.5Ghz S4 Processor and 4.5 inch display Lumia 920 will turn out to be one the best phones by Nokia. Lumia 920 has a rear-facing 8.7 megapixels and a front-facing secondary camera as well. With mapping system integration, Nokia claims that it is the best one ever. According to the reports Lumia 920 will be releasing in AT&T and Verizon in October and November respectively.
Samsung Galaxy S3 has a 4.8inch Super Amoled display. It is loaded with 1.4 GHz Exynos 4 Quad processor and Android 4.0.4 (Ice Cream Sandwich). S3 has rear-facing 8 megapixels and a front-facing 1.9 megapixel secondary camera. It comes in Pebble blue and marble white color with 16/32/64 GB and with an expandable Micro SD. It is one of the best phones Samsung has yet produced. With the latest technology and amazing touch S3 has made his mark on the smart phones market.
Samsung has covered a good market with its latest phone but with iPhone 5 already out in US, UK and many more markets, is ready to spoil the party. Whereas Lumia 920 just around the corner has already made people sense the atmosphere of ground breaking competitions. With so much in these devices, the choice is made quite difficult. Let’s see if the long wait of the Apple user pay off or Nokia steals the show from Apple on its release of Lumia 920. 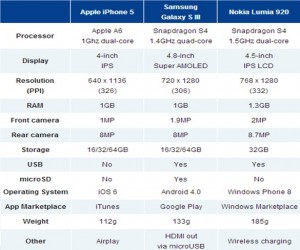 About Author:
Sophia Taylor is a student and a blogger. Her writing basically revolves around technology and writes for all the latest trends in the field of Technology. More over write stuff about iPhone, iPad, Smart Phones and other Apple products. Working on different blogs is also one of my passions. Currently works on Apple Earnings.