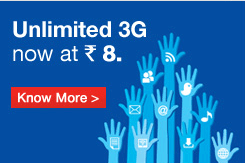 As we know Aircel, Vodafone , Airtel, BSNL ,IDEA already launched there 3G Plan ,But due to 3G Plan High cost its not ease to afford it .

For E.g. If you use New Pocket Internet Smart pack of Rs. 8 , Then you get 1 Day Unlimited Internet and 50 MB 3G Usage Data , After this usage Data the speed comes down to 128 kbps from 3.6 Mbps.

There are many other in 3G New Affordable plan , with different benefit as shown below :

* 697 & 997 are the special plan for Dongle based devise with 7.2 Mbps Speed .
Hope other Telecommunication company also reduce their 3G Plan Rates in Future so that Customer can Afford 3G Easily .

Its Really Worth of Money, 128 3G internet for 1 Month not a big deal.